Iranian Navy? No Cause For Concern. Nyah.

Iran announced this week that they are going to send their new 'navy' to North American waters.


"Iran plans to send ships to the Atlantic to create a strong presence near the U.S. coastline, it has been reported.
The announcement came from top Iranian naval officer, Rear Admiral Habibollah Sayari, according to media sources.
'The Navy of the Iranian Army will have a powerful presence near the United States borders,' its state-run Islamic Republic News Agency said yesterday."

Sensible people are saying that there's "No Need To Fear An Iranian Atlantic Fleet" . Their ships are old, little better than rust buckets, in need of spare parts, never even been outside the Persian Gulf, have no way of refueling... what a joke.

A very sober, very sensible conclusion I'm sure. I'm sure it was also considered very sensible to dismiss fears of Al Queda getting an air force too, I mean, even if they could fly a plane this far... how could they possibly fly back home again? And their pilots... puh-leeze! As the one loon told his instructor, landing the planes wasn't a concern!

What a bunch of Yo-Yo's! 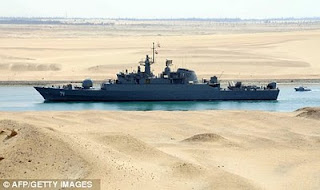 Hmmm... sensible or not... how did that attitude work out for us?

I've no idea what it'd take to put a missile on one of these Iranian rust buckets, or what it would take to shoot a missile up into our atmosphere to explode an EMP, or if that is even possible outside of the theories... of those who are paid to think of such theories.


"The threat has always and still remains the Persian Gulf itself. "

, was just the sort of thought that was considered very respectable on the morning of 9/11/01. I had kind of hoped it had gone out of fashion by that afternoon. How about you?

And as for our own old dots, and our own favorite patterns for connecting them?

Please throw them away.

Given the amount of military presence we have in Iran's corner of the world, it shouldn't be a surprise that they might want to return the favor.

Missile? Who needs that- A properly located 50 foot boat with a nuke aboard,off the Atlantic coast could take out Manhattan.

Since I am sure Obama does not mind the threat, perhaps we need a minuteman "Navy" to take out the threat in international waters.

Anonymous said "Given the amount of military presence we have in Iran's corner of the world, it shouldn't be a surprise that they might want to return the favor. "

While acknowledging that some of our military presense in some areas may be unwise - or at least unwisely conducted (and being the anti-randpaul, I consider the failure to exert our full force in Just issues, to be the unwise part (see this post for redder meat), not our presence), the general idea of our presence in that 'corner of the world' is highly warranted, and warranted in particular because of 'states' like Iran.

A nation that oppresses and murders its own people, as Iran does, is warrant enough to position our military in that region, if for no other reason, than to hem them in.

What Thaddeus Kosciuszko, a Polish Lithuanian who served as a colonel in the American revolution, said 200+ years ago, applies even moreso today:

"Tyranny anywhere is a threat to freedom everywhere"

They are a tyranny, and a particularly vile one, and having denied their own citizens Rights, they forfeit the power to 'peacefully' patrol the seas, or even to venture out upon them. Just as you don't deputize Al Capone to fight crime, you don't welcome a tyrant into peaceful waters.

If they near American waters - turn them back, or sink them.

Van said, “They are a tyranny, and a particularly vile one, and having denied their own citizens Rights, they forfeit the power to 'peacefully' patrol the seas, or even to venture out upon them.”

To which nation are you referring? Iran or the US? Iran certainly has the edge when it comes to denying its citizens’ rights, but the US has made great progress in this area, and excels at limiting citizens of other countries’ their rights. To the five countries being bombed, the US must seem particularly vile. I also suggest that the US is near the brink of tyranny, and because of it’s inclination for military projection, we’re swiftly losing our freedom.

While I wouldn’t shed a tear if the US took swift action against Iran if they agitate it, nor would I be caught up in any nationalistic fervor.

Anonymous said "To the five countries being bombed, the US must seem particularly vile."

I'm sure saddam had similar thoughts. So?

"To which nation are you referring? Iran or the US?"

[sound of spit splattering off the edge of a spitoon rings out] Not one friggin' hint of a shred of moral equivelancy. None. Nadda. Zip.

Are we living up to our own ideals? No. Do we surpass any standard that can be met by any other nation? Definitely. Does that even matter? No.

Any nation that is a terror-based nation (or semi-equivalent collection of huts) is a valid target of any free or semi-free nation, at any time. Period.

They are a threat. That they aren't bombed day and night is a matter of logistics and lack of direct relevance, nothing more.

The problem I have with our involvement in Libya, is the craven way we've gone about it, and whether or not it stacks up as a worthwhile priority of ours at the moment (not!), but as far as bombing kadaffies suspected tents, or blasting awlawwee-wee and his posse of thugs off the highway, I've not one shred of an issue. Or with doing so in pakistan. Or doing so in afghanistan. Or doing so in iraq. Or doing so in yemen, etc.

"...nor would I be caught up in any nationalistic fervor."

Obama's President. Not seeing any liklihood of ginning up nationalistic fervor anytime soon.

One hopes that when the fleet arrives, our Coast Guard doesn't surrender in the manner of the British in 07.

Or bow obsequiously like our Dear Leader did to the House of Saud. That would be embarrassing.