Celebrating the Declaration of Independence that our Founders made....


Bill Hennessy had a post titled "Why I am skipping Independence Day this year", which takes a perspective that's never occurred to me. He mentions several of the sights & sounds of the usual Independence Day celebrations, fireworks, parties, girls in bikinis, saying "But The Fourth of July was freedom day.  Freedom and liberty and redwhiteandblue everywhere you looked.", but then he says:


"I can no more celebrate the realization of that prophecy than I could celebrate a suicide. I’m going to work on July 4th this year. No parades, no bottle rockets, no parties. I can find no reason to celebrate the independence of a people who gave it back.
[For the flag-ettiquette idiots out there (aka progressives), the ensign flown upside-down is a nautical distress signal]"

When I read the Declaration of Independence I read it as a rebuke to us today. Especially with each passing year, the charges against the King become more and more applicable to us today, such as "He has erected a multitude of new offices, and sent hither swarms of officers to harass our people, and eat out their substance.” - the charges are all there, from their pens, lives and sacred honor, to us, down the years, a taunting of us. Rebuking us. Even, perhaps, daring us.

Fireworks finale from the riverfront in St. Charles, MO

From that point of view I've had even more to enjoy each Independence Day over the last 3 or 4 years as now, as more and more, FINALLY, others are beginning to read The Declaration of Independence and realize the same. With each explosion on July 4th the Spirit of 1776 burns brighter with me, especially because of the news of the day, and the Tea Party it has awakened - and the realization that at the very least what our Founders did won't be forgotten without a fight.

So I definitely celebrated the Independence Day this year, as I will next year and the years after.

Which means, of course, that the bikinis are bonus points. 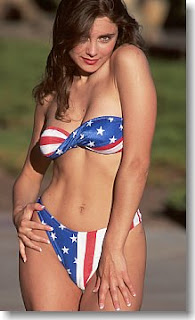 Email ThisBlogThis!Share to TwitterShare to FacebookShare to Pinterest
Labels: The Declaration of Independence

Love your short posts. The bikini girl was perfect.

Lol Ex-D... I added one more pic for you (sorry, only one bonus point per post).