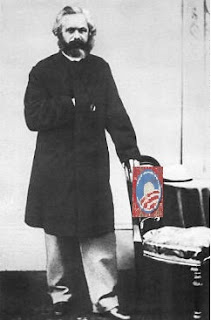 Our ECOTUS (Empty Chair Of The United States) shares more with Karl Marx than an admiration for empty chairs, Obama & his Regulatory Czar, Cass Sunstein, share with Karl a desire to do away with private property rights (gradually of course, progressively, don't scare people!, for goodness sake, just start by spreading the wealth around, then requiring govt to approve of private property, etc), isn't that great!

Why is that great? Well, because, as Karl said in chp 2 of his Communist Manifesto:


"In this sense, the theory of the Communists may be summed up in the single sentence: Abolition of private property. "

See if you can pick out any instances of History Rhyming in these fun facts from Karl's summary of the steps to Utopia:


"We have seen above, that the first step in the revolution by the working class is to raise the proletariat to the position of ruling class to win the battle of democracy.

The proletariat will use its political supremacy to wrest, by degree, all capital from the bourgeoisie, to centralise all instruments of production in the hands of the State, i.e., of the proletariat organised as the ruling class; and to increase the total productive forces as rapidly as possible.

Of course, in the beginning, this cannot be effected except by means of despotic inroads on the rights of property, and on the conditions of bourgeois production; by means of measures, therefore, which appear economically insufficient and untenable, but which, in the course of the movement, outstrip themselves, necessitate further inroads upon the old social order, and are unavoidable as a means of entirely revolutionising the mode of production.

These measures will, of course, be different in different countries.

Nevertheless, in most advanced countries, the following will be pretty generally applicable.

1. Abolition of property in land and application of all rents of land to public purposes.
2. A heavy progressive or graduated income tax.
3. Abolition of all rights of inheritance.
4. Confiscation of the property of all emigrants and rebels.
5. Centralisation of credit in the hands of the state, by means of a national bank with State capital and an exclusive monopoly.
6. Centralisation of the means of communication and transport in the hands of the State.
7. Extension of factories and instruments of production owned by the State; the bringing into cultivation of waste-lands, and the improvement of the soil generally in accordance with a common plan.
8. Equal liability of all to work. Establishment of industrial armies, especially for agriculture.
9. Combination of agriculture with manufacturing industries; gradual abolition of all the distinction between town and country by a more equable distribution of the populace over the country.
10. Free education for all children in public schools. Abolition of children’s factory labour in its present form. Combination of education with industrial production, &c, &c."

By moving gradually, progressively, step by step, the enlightened ones will move "to wrest, by degree, all capital from the bourgeoisie, to centralise all instruments of production in the hands of the State", and it's working pretty well, isn't it?

Not sure? Really? Here, let's count down the steps to our all facing an empty chair:


#10 Dept of Education? Common Core Curriculum? Race To The Top?
#9 Have you ever heard of Sustainability? The Farm Bill? Govt directed Smart Grid? Agenda 21?
#8 EEOC? And what did Obama mean by that " 'we need a civilian national security force" comment? Hmmm.
#7 GM? NLRB? EPA?
#6 FCC? Net Neutrality? Dept of Transportation? FAA? And let's not forget TSA. Remember, baby steps.
#5 The Fed, TARP, Consumer Financial Protection Agency (Yep, that's Fauxchahontas herself, Elizabeth Warren)
#4 If you're finding some reassurance in this, try thinking of emigrants as those with offshore bank accounts, and rebels as... well, have a cup of TEA and think it over.
#3 Death Tax?
#2 Hellooo IRS? The agency charged wtih providing the means of 'Spreading the wealth around'? The Enforcement Agency for the ObamaoCare bill?

#1 Regulatory Agencies. These are the means of abolishing private property (and Individual Rights) for various 'Greater Good!' causes. See above for reference.


As these steps are gradually tightened up, locked down and put into place, and as you may find that you are progressively unable to live your own life any longer, and as you may want to go complain to someone about it... you know what you'll be facing in your quest for Justice?

Now that's moving Forward!
Posted by Van Harvey at 11:18 AM

Nice Post Van. We ain't there yet but it looks like we are down the road way too far to be complacent. It appears that many of the structures are in place. The others, like #9, aren't there but they seem to have a plan ready when the time is right. Overall, a pretty disturbing comparison.

Have you seen 2016? Nothing about "The Chair" that I hadn't heard about except it presented me with much detail as to how his mentors were extreme radical Communists/Socialists. It produced in me a feeling of betrayal by the MSM by hiding these facts.