"seems to have a tendency to shoot first and aim later." 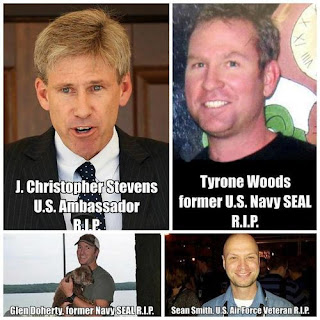 An amazing thing to say, from the person who has shown himself to aim, but not shoot (recall the almost Iranian revolution), and his habit of shooting without ever aiming (his abandonment of Egyptian President Mubarek and losing Egypt as an ally of America), and his preference to simply hand the gun over to others to shoot for him (putting our military under the command of NATO, to overthrow Libyan President Khadaffy), and far beyond a mere slip of the lip, his actions, inaction's and failure to act, has resulted in a dead United States Ambassador and three other personnel.

I don't have too much to say myself, this administration in particular and the Democrat party in general, they are an utter and complete disgrace. Your memory doesn't even have to be tested. Recall Hillary Clinton, after the unjustifiable and ill-advised lending our military personal to NATO to overthrow our tame monster in Libya, chortled about the death of Kadaffy:

Aside from the complete lack of common sense, which kept the Obama administration for even suspecting that it might not be a good idea in a nation of savages, that if you overthrow their brutal leader, who at least kept them under control and kept the even more brutal Al Queda at bay, that disaster was very likely going to follow. But even worse than that lack of forethought, it appears that they had ample warning of the violence to come,


"But according to the Independent, she had no reason to be puzzled. Quoting senior diplomatic sources, the paper reports, “the US State Department had credible information 48 hours before mobs charged the consulate in Benghazi, and the embassy in Cairo, that American missions may be targeted.” Nonetheless, “no warnings were given for diplomats to go on high alert and ‘lockdown,’ under which movement is severely restricted.” "

Hillary Clinton on the disaster in Libya, the death of a U.S. Ambassador and three personnel, had the friggin' gall to ask

The Russian's perhaps summed this up best,


"Aleksei K. Pushkov, the head of Russia’s parliamentary Foreign Affairs Committee, wrote via Twitter: “Under Qaddafi they didn’t kill diplomats. Obama and Clinton are in shock? What did they expect – ‘Democracy?’ Even bigger surprises await them in Syria.”" 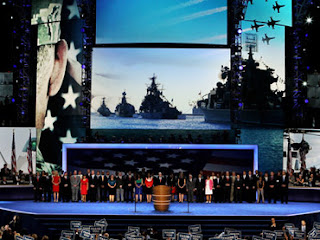 Which is particularly fitting, given that the DNC Convention, in a tribute to American Veterans, displayed in 50 foot tall screens across the stage and to the nation, Russian warships! In a salute to US vets!

And let's not forget about DNC Convention chairman, Los Angeles Mayor Antonio Villaraigosa, blatantly lying to your own convention and the entire nation with:


"In the opinion of the chair, two-thirds have voted in the affirmative" 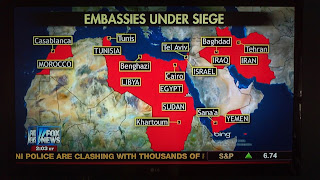 But as almost comical the immorality and incompetence of our DOTUS Obama, and seemingly the entire Democrat party are, it goes far beyond being embarrassing, their actions are having real consequences, ones that are spreading destruction and destabilization around the world.


The entire Democrat party is an utter and complete disgrace.
Posted by Van Harvey at 10:35 PM

This vile sanctimonious self righteous worthless foreflushing sack of human trash jokes about killing another human being? Yeah, he may have been a sack of crap but to take that kind of stand, is absolutely uncalled for and she wants to be pres?