Constitution Day - Considering the greatest of all reflections on human nature

What is it that we celebrate today, Constitution Day, but the efforts of our Founding Fathers, 225 years ago, to harness the pursuit of power, and force it to serve the pursuit of happiness?

It is simply the greatest achievement in history, to date, to enable men to live in liberty, with one another, while disagreeing with each other, under the protection of the Rule of Law.


"We the People of the United States, in Order to form a more perfect Union, establish Justice, insure domestic Tranquillity, provide for the common defence, promote the general Welfare, and secure the Blessings of Liberty to ourselves and our Posterity, do ordain and establish this Constitution for the United States of America." 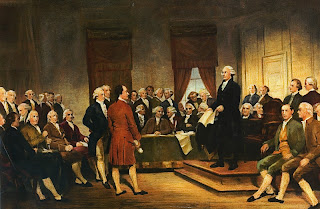 It's worth noting that our Founding Generation found the efforts of the Framers of the Constitution... wanting. They very nearly refused to ratify the document, not because it wasn't an elegant solution to harnessing power, but because they felt it didn't go far enough in securing our Individual Rights. But, in the end, they took a risk, that politicians could be trusted to provide the lacking Bill of Rights afterwards, and though they almost reneged, James Madison insisted that their word be kept, and though he disliked the idea of a Bill of Rights, he submitted a series of amendments which, after vigorous debate, became the original Ten Amendments to the Constitution that we know of as the Bill of Rights, amended to the Constitution for the purpose of restraining the power which the Constitution harnessed into the hands of men:


"Begun and held at the City of New York, on Wednesday, the 4th of March, 1789.
The conventions of a number of the states having, at the time of their adopting the Constitution, expressed a desire, in order to prevent misconstruction or abuse of its powers, that further declaratory and restrictive clauses should be added; and as extending the ground of public confidence in the government will best insure the beneficent ends of its institution;--"

Madison didn't dislike the idea of a Bill of Rights because he didn't want to secure our Rights, but because he feared that any list of Rights, in the hands of politicians, would serve as snares and loopholes to all our Rights, limiting them to only those words written upon parchment. But in the process of writing his amendments, he hit upon the ideas that would become our 9th and 10th Amendments, reserving all those Rights and Powers not listed, to the people and those powers not listed, to the states.

And now we are engaged in an elections, an election, "testing whether that nation, or any nation so conceived and so dedicated, can long endure." If you have not considered what rests at the core of our Constitution, the balancing of powers against powers, forcing ambition to serve liberty... not an easy task. As Madison put it in Federalist #51:


"But the great security against a gradual concentration of the several powers in the same department, consists in giving to those who administer each department the necessary constitutional means and personal motives to resist encroachments of the others. The provision for defense must in this, as in all other cases, be made commensurate to the danger of attack..Ambition must be made to counteract ambition. The interest of the man must be connected with the constitutional rights of the place. It may be a reflection on human nature, that such devices should be necessary to control the abuses of government. But what is government itself, but the greatest of all reflections on human nature? If men were angels, no government would be necessary. If angels were to govern men, neither external nor internal controls on government would be necessary. In framing a government which is to be administered by men over men, the great difficulty lies in this: you must first enable the government to control the governed; and in the next place oblige it to control itself. A dependence on the people is, no doubt, the primary control on the government; but experience has taught mankind the necessity of auxiliary precautions."

Coming into this election, forget about the personalities of Obama & Romney, and look at what they propose... look especially hard at what Obama's administration and his Regulatory Czars are proposing. Consider whether or not a federal agency that can arbitrarily decree that Americans must purchase no less than four gallons of gasoline; consider whether or not that power is balanced against anything at all, so as to serve your liberty - or to extinguish it.

Our Constitution was devised so as to put Government at the service of your ability to live your own life. Is it still serving that function, or imperiling it? That's a question you'd better consider, and  cast your vote upon, because it will determine the direction of this government turns towards, or forever away from, enabling you, your children and your children's children, to live their own lives - or not.
Posted by Van Harvey at 10:55 PM

Email ThisBlogThis!Share to TwitterShare to FacebookShare to Pinterest
Labels: Constitution

Informational article! That is the kind of info that should be shared across the internet. I wish I could express my feelings far more eloquently.


Awesome there, Great work, keep it up. I love returning back to this site and reading the quality content you always have on offer.