Two Faced Claire - Her Right side doesn't know what her Left side is doing... do you?! 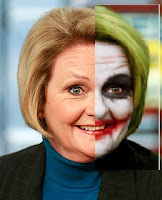 Local activists Gateway Grassroots Initiative led a protest in downtown St. Louis today, outside of the headquarters of Peabody Coal.

The reason why, was not to protest Coal, but to draw attention to what should be front and center in every Missouri voters mind in regards to the senate race between Todd Akin and Claire McCaskill: the issue of jobs, rising energy costs, and an incumbent senator who is more interested in her own political power, than the rising rates Missourians will have to pay for their power, as her policies take affect. 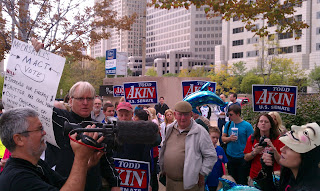 Dana Loesch of 97.1 FM NewsTalk, Jim Hoft of Gateway Pundit, and other local activists, myself included, joined with a large number of local Missourians to remind Claire McCaskill, and those who fund her, such as, amazingly, Peabody Coal, about a few facts:
With so much riding on the price and availability of coal, shouldn't your senator be doing their best to keep coal available and inexpensive? Claire McCaskill knows the answer to that
question is "Yes!", which is why she does her best to dupe Missouri voters about where she sees her power lying, as when her campaign tells our conservative leaning state:


"Claire is fighting to keep utility costs low for Missourians — which is why she opposed 'Cap & Trade' and why she's led the fight to stop or delay burdensome federal regulations. " 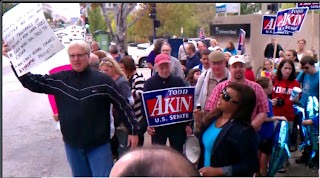 Yet when she is back in Washington D.C. and out of your sight, she casts her vote where she knows her power truly lies - with the Obama administration, and in support of those fatal EPA rules, as she:


"... voted against the so-called disapproval resolution while Sen. Roy Blunt, R-Mo., supported it. "

The vote on the resolution failed was painfully close, but at 46-53, it failed. What's interesting, is that "Five Democrats from coal-rich states voted with the Republicans in support of the resolution"... was Claire McCaskill one of them?! Nope!

Claire voted for her power, not yours. She says one thing out of the Right side of her mouth, but her Votes come from the Leftist side of her mouth, so the jokes on you... are you laughing? You shouldn't be, because her vote went to strengthen the Obama administrations grip upon power over the coal industry, enabling the MACT rule to stand, and that EPA rule,


"... calls for the first national standards limiting a host of airborne contaminants, among them mercury, arsenic and chromium, from the emissions of power plants. It is known as MACT — for Maximum Available Control Technology — a label that points to the eventual requirement that both coal-fired and oil-fired plants would need to install to advanced scrubbers and anti-pollution equipment.

Blunt cited studies estimating a $10 billion cost for industries across the country to comply with the rule. He argued that it presents an undue burden on states like Missouri that rely heavily on coal to generate electricity.
What this really stands for is an assault on coal and coal-based utilities," he said on the Senate floor."

The EPA's MACT rules are the essential components of the Obama administrations original 'Cap & Trade' policy, which, after congress refused to pass, Obama used his EPA to force its components into place anyway.

It is important to keep in mind that this policy is designed to make your energy costs go through the roof, as then candidate Obama explained:


"When I was asked about the issue of coal, uhhh, under my plan of a cap and trade system, electricity rates would necessarily skyrocket."

The poison fruits of this policy is already taking affect. Patriot Coal, a spin off of Peabody Coal, recently was the first U.S. coal company to file for bankruptcy,


"Patriot Coal is the first U.S. coal company to file for bankruptcy in many, many years as its shares fell 72 percent to 61 cents. Its shares had traded as high as $24.99 last July. Patriot Coal was spun off from Peabody Energy Corp in 2007. It has 12 active mining complexes in Appalachia and the Illinois Basin with about 1.9 billion tons of proven and probable coal reserves.[ia]" 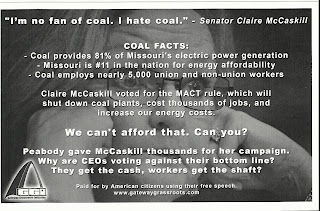 Given how close to home that is hitting... why in the heck is Peabody Coal, giving so much money to Claire McCaskill's re-election campaign?

Shouldn't Peabody's Board of Directors and its Shareholders, be just a little curious about supporting a senator who has made her feelings so very clear in regards to their product? As Claire has said,

Well Claire, we're no fan of yours, and we're going to show you, that by voting for Todd Akin for U.S. Senator from Missouri this November, We The People are coming to take your power away!