Hey Claire, riddle me this: On the one hand you claim that controlling the Senate isn't all that important  (and yet you are currently in, and running again for ... the senate...right?), and on the other hand, your Democrat party's control of the senate has given your husband's business $40 million or so in Obama stimulus dollars.

How does that work out? It's almost like your Right side doesn't know what your Leftist side is doing?

And on the Leftist: Claire's husband snaps up $40 million in big Obama stimulus bucks.

That just doesn't balance out, does it?

Oh, but wait, then... it also looks like the Leftward hand doesn't know what the behind the back knife-holding hand is doing either... why else would mostly Democrat leaning Flight Attendant union members protest Claire McCaskill's campaign office with chants of:


"Represent Missouri not Texas!" and "Texas has 3 Senators, Missouri only 1!"? 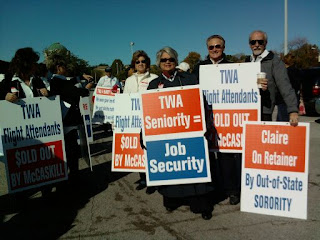 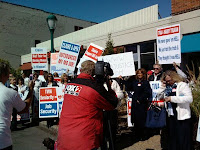 It seems as if the extremely Two Faced Claire betrayed her Missouri constituents for her old college friends and donor$ from... Texas.

Stacy E. Washington filed a post from today, from the site outside Claire's St. Louis office, where a hundred or so Flight Attendants were demonstrating just how very displeased they are with being flown around on AirClaire:


"According to the two [American Airlines] flight attendants I spoke with this morning, Claire has sold them down the river for campaign donations and as a direct favor to her old college roommate, Ann Loew, who is, you guessed it: the APFA Executive appointee!"

Are you Joking? That's extremely Two-Faced, even for you Claire! 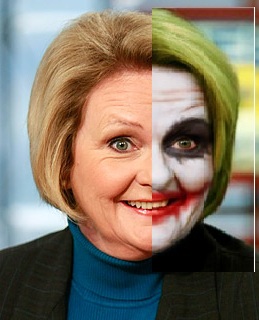 Missouri: You are the Show-Me state... how much more do you need to see?
Vote McCaskill out of office before she helps you some more!
Posted by Van Harvey at 12:28 AM

Oh, but the $40 millions was just for "property improvements".

Really, if my fellow Missourians are stupid enough to buy that BS, they deserve what they get. It would help, of course, if the media would report it.