If Govt is reckless with money that's not theirs, just imagine how they'll treat your human capital (aka:children) - Common Core State Standards

After attending our local Common Core 'presentation' by Missouri's DESE, I've only time for a brief pre-post post. This picture (H/T Adam Bohn) of the only informational hand out that the DESE (Department of Elementary and Secondary Education) people brought to the meeting tonight, should tip you off to how the evening went.

All they thought to provide interested parents, was a one sided questionnaire, to a meeting of parents who have been chaffing for a chance to comment on and ask questions about the monstrosity that is the Common Core Curriculum. Their handout has two sections. The first says:


"1. What do you like about the Common Core State Standards?" 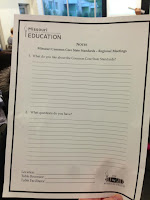 , followed by a number of blank lines suitable for recording our praises, and then a second line:

and another section of lines, followed by an optimistic section to be filled out afterwards, for

They never got that far, as their 'Nudge' bombed, big time.

Bringing a knife to a gunfight would have been a step up from bringing a Thank You/"How do you like me now?" questionnaire to a Common Core Curriculum 'presentation' for angry parents armed with burning questions and an expectation of obtaining real answers. They oughta pay closer attention to the Missouri State Motto (maybe it's not in their tests?).

The presenter, a former school superintendent, Maureen Clancy May, gamely attempted to deliver a lengthy PowerPoint puff presentation, complete with video commentary from DESE leader, Chris Nicastro... to an audience who quickly realized, and politely (at first), let her know that her information was neither new, informational or in any way adequate to their expectations of useful information, discussion and debate.

I felt sorry for her, briefly, but... seriously - very briefly. While I understand and sympathize with the expectation of being given a polite hearing, once it is clear that your audience finds that the information you are presenting is neither new nor adequate, and yet you still attempt to press on and over your audience with more of the same, you've passed well beyond the realm of the sympathetic and charged directly onto the grounds of the disrespectful.

To lure people out of their lives in the expectation of information, discussion and debate, and then to make it clear that not only have you not come prepared to answer any of their questions, but she also made it clear that neither she nor DESE had ever had any intention whatsoever of answering any of our questions - that was infuriating. Her one comment to one of many questions on the CCSS summed it up well, and I quote:


"I can't answer your question in a public sense."

There ya go. They simply called us parents out of our evenings to be hosed down with a content-less presentation and a healthy heaping of condescension. Sums their educational philosophy up rather well.

Towards the end of the Q&A that we finally forced upon them, I asked her, truly puzzled,


'Why are you surprised by the reaction of the people here?'

, and she was speechless. When I followed up afterwards, she so much as said that she really expected our common decency to yield to their completely disrespectful presentation. Surprise. Another DESE representative, Doug, I think his name was, said that he couldn't understand why anyone was the least upset, after all, he said,


"This is the first time, the very first time I can remember, where everyone agrees upon a plan. Our big corporations agree, our governors agree and the leaders of our educational system all agree, these standards are the best for all concerned - I can't understand why you don't welcome them."

I don't doubt his surprise. Much as we'd like to attribute nefarious conspiracies, the truth of the matter is probably closer to being that these standards are the results of smart people who think that what they think is best, should be simply accepted by the little people, to help improve their lives and serve the greater good.

One good thing did come from it though, it provided corroboration for the fifth and last post in my look at the flip side of "Common Core Curriculum Standards: What to do about the parents?", which will be coming Monday.

Ok, it's late and I'm beginning to sleep type, so for the moment I'll just leave you with Brian Bollmann's post whch  lists a number of the questions that were also not answered in the DESE presentation given in Cape Girardeau, MO. There are questions there, some of which were asked at our gathering as well, which I strongly suggest that every parent and citizen read, ponder, and ask of their friends, neighbors, relatives, co-workers and representatives.

I'll close with this reply I made to someone tonight who'd mentioned how famously irresponsible government is with our money, because it's not theirs:

Morning Coffee Comments
I'll tack on a couple comments before heading out to work. First, let your MO State Representatives know that you support HB 616 that:


"SCS/SB 210" - This act requires the Department of Elementary and Secondary Education to conduct at least one public hearing in each Missouri congressional district prior to the full implementation of the Common Core State Standards. The Department must notify school districts and parents of public school students of the hearings at least two weeks in advance.

They're not enough - action rarely is - but they're a start. If you want to bring about real change, begin questioning Common Core to everyone you know.

Second point, it was interesting the differing expectations for the evening, from people of the Lindbergh School District, and the DESE representatives. When I asked Lindbergh people if they were surprised by our reaction to the 'presentation', and none of them were, there was a distinct "I can't speak my mind at the moment, but NoooOOOooo I'm not surprised - LOL!" smirk on several of their faces. Yet the DESE were completely shocked. My bet is that they are far to used to merely delivering the fruits of their thoughts to people, anything approaching Dialog, being completely foreign to them.

Also, while the DESE gent I spoke with, Doug, who said he was surprised by their reception because for the very first time business, govt and the educational bureaucracy were in agreement on a plan, he seemed completely unaware that that was far from the case. When I pointed out to him that the one slide of the presentation that showed multiple descending lines of student performance on a graph, were lines that have always been descending, and that CCSS would continue with more of the same, he was quick to disagree... but he had no basis for that disagreement. He seemed to know nothing of several earlier moments of the sort of agreement he was so impressed by, and gave no indication of knowing that in fact modern (post Civil War) American Education began with such ominous instances of agreement, and has been pushed forward by multiple periods of such agreement.

Of the recent fame of Finland's success in education, he knew only of "In Finland, teachers are held in high regard... not so much here..." and knew nothing of (though he was quick to deny it) the autonomy Finland gives their teachers to choose their curriculum, lesson plans, and write their own tests.

In short, he was another smart guy, with no base of information from which to guide his intelligence, and when mixed in with the power to affect other people's lives, that is a recipe for disaster.
Posted by Van Harvey at 12:54 AM

Thanks for reporting on Common Core! Thrilled to find your blog!

I attended the DESE Common Core meeting in Hazelwood. The atmosphere was very cordial and I really enjoyed meeting new people who are also concerned about education!

After watching the videos from the Lindbergh and Springfield meetings on MEW, I have to say that I feel badly for the representatives DESE who were sent out to facilitate the meetings. My experience, concerning alot of different issues in education, has been that people in these positions are inundated with "controlled messaging" - which began back in 2009-2010 regarding CommonCore. Since then, they have undoubtedly been working hard to "implement" and may not have investigated (the unconstitutional) CCSS "Initiative" on their own. They were sacrificed by DESE (imho) in order to gather public opinion info on CommonCore. I wouldn't be surprised if a few of them are absolutely furious when they begin to independently research some of the questions posed that night.

Have just encountered your page and I guess you should be complimented for this piece. More power to you!