Memorial Day: Ideas worth dying for

Since 1789, the members of America's armed forces have placed their lives in harms way by taking some version of this oath:

A heartbreakingly large number of them have lost their lives in service to that oath, and we remember them today. 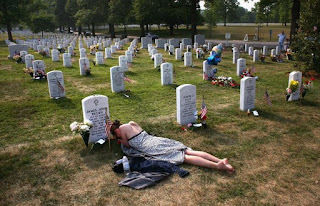 It seems to me, that we can further honor their memories, by attending to what they pledged their lives to defend, from all enemies, foreign and domestic, bearing true faith and allegiance to, the Constitution of the United States of America.


"We the People of the United States, in Order to form a more perfect Union, establish Justice, insure domestic Tranquility, provide for the common defence, promote the general Welfare, and secure the Blessings of Liberty to ourselves and our Posterity, do ordain and establish this Constitution for the United States of America...."

Remember those who lost their lives in service to this nation.

Honor them by remembering, and preserving, what they died defending.

One other suggestion, that document is only paper without those ideas of liberty which animate it - and they cannot truly live, if they do not live within you, the citizens of this nation, which those brave men and women gave their lives for. Fundamental to those ideas of "...Life, Liberty and the pursuit of Happiness..." for which the Constitution justly instituted our government to secure and uphold, was an understanding that made them more than just words, and which were ably summed up in James Madison's essay On Property, which ends with:


"...If the United States mean to obtain or deserve the full praise due to wise and just governments, they will equally respect the rights of property, and the property in rights: they will rival the government that most sacredly guards the former; and by repelling its example in violating the latter, will make themselves a pattern to that and all other governments."

I urge you to read the entire essay, it is not long (much shorter than most of my posts), and remember, especially today, that as the ideas within it have proven to be worth dying for, they should also be worth living for.

Email ThisBlogThis!Share to TwitterShare to FacebookShare to Pinterest
Labels: Memorial Day, The Constitution