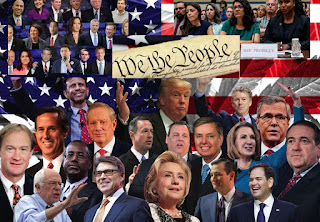 Don't believe me? Ok, here ya go: So... lemme guess... you're all stirred up because Trump tweeted, or by those he tweeted at. Again. Huh.

And you're shocked about that? Seriously? And you expect me to be shocked? Please. I really don't care whether you support Trump, tolerate or oppose him, or are a NeverTrump'r, I'm sorry/not-sorry, but your shock and outrage at him, or at his critics, or at those he was critical of, is disingenuous, pathetic, and deplorable.

Listen up buttercup: We The People (that's all o' y'all) have been making some consequential choices for a very long time - and with those choices, habits, and educational standards, in Art and entertainment preferences, et-friggin'-cettera, we've chosen to move on from:

And no matter how fair it isn't, what all of those choices mean, is that we've mandated that presidents such as Silent Cal Coolidge, are no longer an option in America, they're now a thing of the past, because we've 'progressed' - and guess what: What that 'progress' looks like is Donald Trump Tweeting, and those he's tweeting at.

And you want me to get all upset over the pitiful handful of a few whoevers that you think are our 'real problems' today, while all o' y'all busily ignore the rest? Please. Maybe tomorrow. But for now, have a chair.

And don't give me no Left, Right, or Libertarian finger-pointing B.S. - We The People, and that's all o' y'all, have gotten into the habit of making the choices that we've been making, and the consequences of those choices (and the ideas that drive them - or fail to), are what have brought us to where we are today.

Choices have consequences. Don't tell me you haven't made those choices yourself, that's a lie, and whether you're lying to me or to yourself, lying by commission or omission, I really don't give a damn - you either knew that the choices you've made, or not objected to, were wrong, or you suspected they were and didn't bother to find out why, or if you understood why you didn't do all of what you needed to do about them. Same difference. And no, I don't excuse myself from that, although I've renounced (most) of them, and have done (some) of what I could about them, at one time I too explicitly made them, or enabled them by default. By choice.

Those choices have consequences. Those consequences are not optional. The world we find ourselves in today, is one that we've all chosen to bring about.

In the meantime...as the consequences of what all o' y'all have chosen are continuing to come home to roost upon our faces, just shut-up about it already. Go do something to create better consequences, and get the hell off of my lawn.
/rant
Posted by Van Harvey at 9:17 PM

Don't know If this was a Pro or Anti Trump message, but:
He has a track record of being right in his extreme statements later, so I will give him the benefit of the doubt.
He is Right about these awful people.
And, most importantly, Trump and the worldwide steamrolling conservative, nationalistic, populist, anti-refugee movement he is just a small part of, is the only successful anti-left movement that has Worked. None of the original conservative, William F. Buckley, lets just get along RINO efforts, or the Tea Party movements worked at all. All Failed and were Weak.
We need something a bit more bare-knuckled and strong - trying to be Nice, to "work through the system" like the Tea Party did, to pass out Constitutions door to door (That really worked), and be overly concerned with all the details of the Federalist Papers, will just get us killed by the Left. They use all that stuff for Toilet Paper anyway.
They have been hurting the average Citizen for over 100 years - it must stop now. Our Civilization and Culture are at stake.

Good for him and all he has accomplished so far.