Shouldn't you be concerned that your calling ''Whataboutism!', makes it all about about you?

The word 'about' can be interesting in the way it often directs our attention. It can send us on towards where it's wise to go, but more often than not, it sends us on to where it's easier & more pleasing to go, while dragging you and all of your baggage along with it. If you've seen such matters playing out with your otherwise reasonable friends, probably especially over the last few weeks, you know how disturbing it can be. But what about if it's you?

Of course the most obvious example of this today, is where our attention tends to go to at the mere mention of a certain person's name (perhaps one comes to mind for you?), and as the pitch and intensity of the voice audibly rises - an inflection so pronounced that it's even detectable through text - how aware are we that others might be aware of that inflection point in us as well?

It's something worth being concerned about, because it's concerning to see - words matter, and your use of them matters, and because ideas - or the lack of them - have consequences, even for yourself.

You should be concerned about what happens to you through your words, as when, following that inflection point, you allow your words to describe the person in question in cartoonishly one-dimensional terms - pro or con - it's disturbing for others to listen to. Are you are aware that since what your words describe (in outrageous charges or praises & inappropriate terms) are not describing someone who's recognizably human, they're unlikely to influence the other person's thoughts about the inflected person in question? So not only are they wasted words, but more to the point, as such feverish descriptions are unworthy of serious consideration, do you really think that your words are going to let you escape from serious reconsideration, for having said them?

And then there's the point where 'About' can lead us eagerly unawares into false assumptions about what we're even being asked to think about.

For instance, for most people, when someone has brought up an unexpected over reaction to a scenario, it's a typical reaction, and a very reasonable response, for them to bring up a similar situation, so as to ask what led you to be inflamed about the one, and yet dismissive of the other. That is not an attempt to ignore whatever problem it is that you're inflamed about, but an effort to discover how you distinguish one from the other, in order to either see what they themselves might have missed, or to point out something significant in what you might have missed.

But, the year 2020 being what it is, today such questions as honestly asking 'but... what about...' can come freighted with so many false assumptions, blind spots, and baffling misdirections, as to get you accused of fallacious reasoning for daring to try to understand the other person's outrageous position. For myself, I confess I can't help myself from, not infrequently, dropping an 'about' like a banana peel in their verbal path, just to see if the inflected person I'm talking to will watch their step and consider the nature of the question asked, or... will they instead blindly skip on down the path of the easy out, escaping into charges of 'Whataboutism!', making the issue less about the question involved, than their own inability to reasonably consider any questioning of their inflection point at all.

If you've been lucky enough to not be familiar with the newly re-popularized charge of 'Whataboutism!', it's a tactic that was last popular with defenders of the USSR, as a means of escaping attention and judgement for something that was clearly wrong, by citing what might narrowly and ambiguously be called a similar situation, with the implication being that by means of that thin similarity, you are no better than they, and so have no moral authority to denounce their actions. For instance, Americans might once upon a time have brought up the USSR's political persecution of Solzhenitsyn's freedom of speech, or the killings of the unexpectedly politically incorrect such as Leon Trotsky, at the hands of KGB assassins, to which the defender of communism might've responded with "What about America's persecution of Al Capone for breaking the IRS's rules, or the FBI's killing of John Dillinger?!", essentially 'arguing' that 'Two wrongs make... it all, alright'.

That is what 'Whataboutism!' is all about, using false comparisons and ambiguities to deflect and escape from the task of making, or facing up to making, an honest evaluation.

It is not 'Whataboutism!', however, to ask about a reasonably similar situation in order to try to identify and clarify what you think makes the two things different, but it is a form of 'Whataboutism!', when you attempt to evade making those clarifications by calling their effort 'Whataboutism!'! 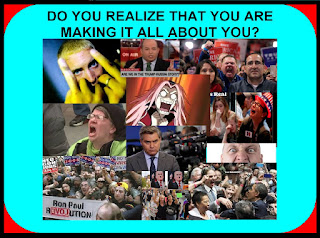 And so, yes, with that very much in mind, I'll often ask a person about a similar scenario, with particular attention to my use of the word 'about', in asking something along the lines of:

, for myself at least, my 'about' actually is an effort to get the person I'm talking with, to give their judgment of the differences between the issues; but the point of my comment is not only what [etc., etc., etc.] did when doing '[yada, yada, yada]', but what their own reaction to the comparison in question, was. Not the '[yada, yada, yada]' itself, or the [etc., etc., etc.] who did it, and NOT whether they themselves approved or disapproved of it, but what their response to that situation was then, and what their response is to making a reasonable comparison to it, now.

IOW, the About in question is NOT 'about' either situation in question, but their own ability, or inability, to reasonably consider and respond to their own inflection point. And if they were able to respond reasonably to that instance of '[yada, yada, yada]' by [etc., etc., etc.] then, what do you suppose it is about the person in question, that causes their voice and intensity to rise so high, and their own reasonability to fall so low?

Hmm? What about me? I'll admit... though I don't think there are any people who inflame me like that, there are some topics that can quickly get a rise out of me, but I'm aware of and on the lookout for those situations, and being aware of your own weaknesses, means that they're unlikely to escape your attention for more than a moment, and will rarely drive you through an entire argument.
For some such inflection point to routinely drive you into instant and lengthy rants, or to in any way direct or drive you through your days, implies not only a lack of awareness about yourself, but about what's important in your life, and doesn't wasting your time on words without meaning, mean that you're missing out on what it should all be about?

Are you aware of your own inflection points?

You should be aware that when your words have no visible basis in reality, not only are they are unlikely to cause another person to think differently about the person in question, but they likely will cause many of us to have 2nd thoughts (and often 3rd & 4th ones) about you, and about your ability to think about [etc., etc., etc.] & '[yada, yada, yada]', today.

Don't get me wrong, there may be an argument to be made for the 'side' you see yourself as promoting, but you aren't making it! And you're damn sure not helping to spread it.

In this case at least, in jumping to the easy out of 'about', you only succeed in making the issue all about you.

I think you might want to think about that.

Email ThisBlogThis!Share to TwitterShare to FacebookShare to Pinterest
Labels: Whataboutism