The Supreme Court and We The People's lost opportunity costs

There's not much that I think I need to add to what I said on the last election year SCOTUS nomination four years ago, other than perhaps to re-emphasize a couple key points: Was it - technically speaking - giving 'advice & consent' to President Obama's nomination of Garland, for Senator Majority Leader McConnell to say that the senate would decline to approve any nominations made during that year? Sure. But it was a cowardly evasion of responsibility for the Senate to consent in doing so. 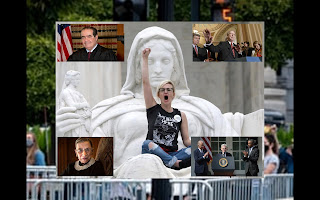 As Sen. McConnell obviously had the votes to decline to take up the nomination, he also had - if either he or his fellow senators took their responsibilities seriously - the votes necessary to properly examine the nomination of Merrick Garland, and if they had done so, they would easily and rapidly have found abundant evidence (some of which I pointed out in this post) that Merrick Garland, due to egregious and deliberate misinterpretations of our constitution, and an appalling lack of respect for the individual rights of the citizens of the United States of America, was manifestly unfit to sit upon the Supreme Court. Not only did they have the votes to do that, they also had the rare opportunity to demonstrate and teach the American people, and the anti-American contingent amongst us, exactly why nominees such as Garland were unfit for office on the SCOTUS, or in any branch or agency of our nation's government.

But the GOP led Senate punted instead. Opting for the juvenile (and soon to be empowering) 'no nomination will be considered', option.

The fruit of that pathetic 'easy out' have been on abundant display in the media, such as when former Clinton campaign chairman and chief of staff George Stephanopoulos, now charting unbiased news (*cough*cough* B.S fake news*cough*cough*) on Sunday mornings for ABC, to ask Sen. Cruz:

"Do you have the votes ... to confirm before the election?"

, as well as with Sen. Graham's confident assertion that

“We’ve got the votes to confirm Justice Ginsburg’s replacement before the election,”

to push through Trump’s Supreme Court nominee before the election, based upon counting political noses alone, without any regard for the qualifications of the Justice being nominated to the court, which is unavoidable, as that potential justice HAS NOT EVEN BEEN NAMED YET.

Additionally, past performance being a definite influencer of future action, it also helped shape the appalling spectacle of the President of the United States of America, being heckled while paying his respects to the deceased Justice Ginsberg at the Supreme Court's building, to the despicably barbaric caterwauling of those who've been been burning up our cities, tearing down our statues, and spitting upon the United States of America in general and directly and indirectly heaping vitriol upon the Constitution by which We The People formed our nation through.

There is, and necessarily always has been, a political component to nominating and voting upon justices for the Supreme Court - and there should be, that represents our, you know, We The People's, voice. But where it should be an aspect of the process, it has now, through a long, long, string of events across decades, it has now become the primary step in all such nominations, and Justice, and We The People, can only be the poorer for it.

President Trump has the absolute constitutional power to name a new justice to the Supreme Court of the United States of America, yesterday, today, and every day until the end of his term. I just wish that through the costs of all of the lost opportunities, I could see equally clear evidence that We The People are deserving and worthy of it.