What wasn't debatable: the absence of Frederick Douglass & the Columbian Orator

So I watched the Trump/Biden 'debate' tonight. What came to mind was this, from one of America's greatest essayists, writers and orators, Fredrick Douglass's "My Bondage and My Freedom", who educated himself via a collection of classic forensic & oratorical speeches in the Columbian Orator - not because something said tonight reminded me of these speeches - please - but because absolutely nothing said tonight, reminded me of any of these speeches, or of those minds capable of and interested in grappling with them, or of a people interested in listening to that effort. The direction and theme of modern education (first floated in the 1830's, BTW), was that reading and learning the speeches of people like Cicero - the type of learning that our Founder's generation and America was formed from - was 'elitist'. Well, beyond who you or I believe 'won' or 'lost' this debate tonight - whether the debaters, the moderator, or a good chunk of the audience - what they most definitely did not bring to mind, was the image of important ideas, delivered in an eloquent and forceful manner, that once marked an educated American mind. What was on display tonight, was the fruit of the deadened heart and soul of modern education (get your kids out).

IOW, neither the debaters, moderator, commentators, showed an understanding of the importance of an educated - not schooled - mind, guiding or moderating their words and manners. There was no sign of the following, in this 'debate': 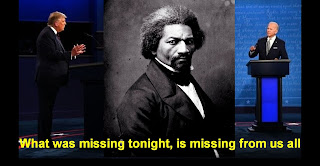 "... When I was about thirteen years old, and had succeeded in learning to read, every increase of knowledge, especially respecting the FREE STATES, added something to the almost intolerable burden of the thought—I AM A SLAVE FOR LIFE. To my bondage I saw no end. It was a terrible reality, and I shall never be able to tell how sadly that thought chafed my young spirit. Fortunately, or unfortunately, about this time in my life, I had made enough money to buy what was then a very popular school book, viz: the Columbian Orator. I bought this addition to my library, of Mr. Knight, on Thames street, Fell’s Point, Baltimore, and paid him fifty cents for it. I was first led to buy this book, by hearing some little boys say they were going to learn some little pieces out of it for the Exhibition. This volume was, indeed, a rich treasure, and every opportunity afforded me, for a time, was spent in diligently perusing it. Among much other interesting matter, that which I had perused and reperused with unflagging satisfaction, was a short dialogue between a master and his slave. The slave is represented as having been recaptured, in a second attempt to run away; and the master opens the dialogue with an upbraiding speech, charging the slave with ingratitude, and demanding to know what he has to say in his own defense. Thus upbraided, and thus called upon to reply, the slave rejoins, that he knows how little anything that he can say will avail, seeing that he is completely in the hands of his owner; and with noble resolution, calmly says, “I submit to my fate.” Touched by the slave’s answer, the master insists upon his further speaking, and recapitulates the many acts of kindness which he has performed toward the slave, and tells him he is permitted to speak for himself. Thus invited to the debate, the quondam slave made a spirited defense of himself, and thereafter the whole argument, for and against slavery, was brought out. The master was vanquished at every turn in the argument; and seeing himself to be thus vanquished, he generously and meekly emancipates the slave, with his best wishes for his prosperity. It is scarcely neccessary(sic) to say, that a dialogue, with such an origin, and such an ending—read when the fact of my being a slave was a constant burden of grief—powerfully affected me; and I could not help feeling that the day might come, when the well-directed answers made by the slave to the master, in this instance, would find their counterpart in myself.

This, however, was not all the fanaticism which I found in this Columbian Orator. I met there one of Sheridan’s mighty speeches, on the subject of Catholic Emancipation, Lord Chatham’s speech on the American war, and speeches by the great William Pitt and by Fox. These were all choice documents to me, and I read them, over and over again, with an interest that was ever increasing, because it was ever gaining in intelligence; for the more I read them, the better I understood them. The reading of[124] these speeches added much to my limited stock of language, and enabled me to give tongue to many interesting thoughts, which had frequently flashed through my soul, and died away for want of utterance. The mighty power and heart-searching directness of truth, penetrating even the heart of a slaveholder, compelling him to yield up his earthly interests to the claims of eternal justice, were finely illustrated in the dialogue, just referred to; and from the speeches of Sheridan, I got a bold and powerful denunciation of oppression, and a most brilliant vindication of the rights of man. Here was, indeed, a noble acquisition...."

No matter who you or I might've favored in the 'debate' tonight, none of the parties involved showed any notion that words and how you use them is important to living your life, none displayed anything worth aspiring to. It's safe to say that nothing from this debate will ever be positively used by anyone in the future - there will be no future 'Columbian Orator' containing any of the text of this evening. Does that matter? Well, do you really think that We The People will long survive having the power that America has, without having minds that even aspire to a familiarity with, let alone mastery of, the sound reasoning and eloquent expression of those ideas that alone can direct and restrain that brute power?