Birthdate of Liberty: Preserving the Right to Life, Liberty and the Pursuit of Happiness 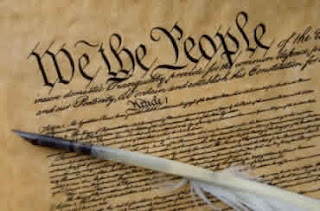 Tomorrow, Sept 17th, 1787, is the birth date of the Constitution of the United States of America, which was designed, and amended, to provide a framework for governing a free and moral people, who for the first time in history, were to be able to live as human beings - free.

Today, Sept 16th, 2009, Senator Baucus released his healthcontrol plan for the Govt takeover of the healthcare industry, and by extension, nearly every personal choice remaining to us in our lives (I haven't been able to make a detailed examination of it yet, but download the .pdf and run searches for "prohibit", "contribut" (most cases 'contribute' and 'contribution' can be read as PC for Tax or Fee) - and you'll begin to get a view nearly as chilling as the House Bill which I dug into here), and which would spell the effective end of "Government of the people, by the people and for the people".

Today, the misshapen descendants of our Founding Fathers, who they would have recognized as their oft dreaded and foretold "Debased Posterity", are busy churning out plans to extend - like candy to children - a new 'right' to health care, in order to rob us of our rights - and worse.

Yesteryear, our Founding Fathers designed a sound framework for governing, and then after lengthy debate, available to us in the greatest extended political discussion in the history of mankind, The Federalist Papers, and the Anti-Federalist Papers, the Constitution was accepted, with the proviso that certain vital amendments were to be written and submitted to ratification by the states, to protect vital rights of the people.

One question: Why was a vital 'right' such as Health care, not included in those first 10 amendments known as The Bill of Rights?

Why were obviously more vital 'rights' such as food, shelter, clothing, jobs... why weren't they included in those amendments?

Of all the many Rights included under the concept of Individual Rights, why were only a few selected? And why were the ones that were selected, selected, and not the others?

The Right to political free speech, the right to practice (or not) your own religion as you saw fit, the right to peaceably assemble, the right to bare arms, , to be secure in your home and possessions and to be free from unlawful search and seizure, the right to due process, to be safe from double jeopardy and self incrimination, trial by jury under objective laws, to be free from the imposition of excessive bail, fines and cruel and unusual punishment... and why list a right that did nothing but say there were other rights not listed that can't be denied or disparaged... and though unnamed, were retained by the people??? Or again, that there were other unnamed rights, which were reserved to the States, and to the people again? What was that about?

Why list add the amendments listing those rights, and then add the Ninth and Tenth amendments, which essentially list other rights by not naming them, and claim these unnamed rights belonged to the states and to the people? Why do all that, and yet not list any of the the 'rights' so important to proregressive leftists, such as the (abominable) 'economic bill of rights', and 'rights' to health care, ala FDR, Obama... & Baucus?
First off, of course, not being children, they didn't mistake needs for Rights, and I won't say anything further about such idiocies on this day.
Secondly, because these were men who understood history, who had a working knowledge of philosophy and law and first hand experience with tyranny. They knew Rights were not bestowed by Govt, but were already possessed by man in his nature as man, that we were "Endowed by our Creator" with these inalienable Rights, and that all men were all created equally with these rights.

The Founding Fathers, benefiting from not being burdened by over a century of public education and over a half century of Main (yellow) Stream Media, they were not deluded into thinking that Govt had ANYTHING to do with bestowing 'Rights'... the Bill Of Rights were designed to protect those particular Rights because they knew that no Tyrant could ever make a successfull rise to power, while they were still safely retained by We The People.

This is the 'secret' that has been chipped away at by over a century of assertions of a 'living constitution' and 'economic bill of rights' and other schemes by proregressive leftist demagogues seeking power at the cost of your precious individual rights, rights which you possess in your bones, and which the Constitution and its amendments were designed to see that you retained.

President Obama, Senator Harry Reid, Speaker of the House Nancy Pelosi, and nearly all of the 535 Senators & Representatives, as well as much of the Judiciary and regulatory bureaucracy are trying their damnedest to trade you a lolly pop of specious 'benefits', in exchange for your rights and liberty, as the political perverts they truly are.

Fight them! Stand up for your Constitution! Men and Women far better than most of us, pledged their lives, their fortunes and their sacred honor to make it possible, for the first time in history, for a people to live as human beings were meant to live - Free! Millions of young men and women have died in our battles and wars defending your right to keep predatory govt's - foreign and domestic - at arms length from your precious Rights.
Remember most of all that these Rights are not merely the dry, dusty chits of academics and politicians to be used in their contests. These Rights are vital not only to your Liberty and Freedom, but to your very soul.

Stand up for them in the only way you really can - by learning what they are and what they mean and how they Must be defended - and do it!
Posted by Van Harvey at 11:13 PM