One lump or two? What next as the Tea Party brew strengthens 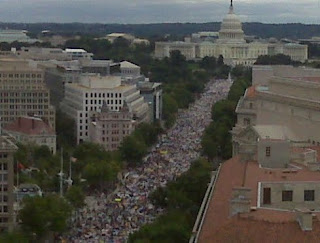 Well I asked/pondered this after the 4/15 Tea Party in St. Louis,

"...maybe it’s best left in its natural decentralized structures as they are now, each ‘chapter’ communicating, debating, but putting their own public pressure on their local pol’s… kind of a new situation we need to give some thought to.
We shouldn’t lose sight of the fact that we have had many, many political parties, and presidents elected under them… Whigs, Federalists, Democratic-Republican, Know Nothings (!)… but in this current political climate, I just can’t see it being helpful or successful – better to have people who are united on principles, though not necessarily on their application (remember Madison & Hamilton agreed on principles, but violently disagreed on applying them), finding, screening and nailing or promoting, candidates through the existing parties..."

and I think those initial thoughts are still the lines along which it needs to go. No new Party is necessary, needed or wise - as the Who said, that just ends up as 'Meet the new boss, same as the old boss'. And I don't think it needs to push candidates in the GOP, or the Dems for that matter.

What I think, is that it needs to remain it's own, non-affiliated (though obviously 'conservative' in the constitutional sense), 'Voice of the people', of those who usually don't bother to speak up and make nuisances of themselves. A sustained grass roots voice of 'We The People' which will target idiotic corruptions of our government, weak knee'd or hypocritical legislators, judges and bureaucrats, and bring the focus of Govt back down to the ground of Individual Rights, Property Rights and objective, Constitutional Law.

Something else to note about the Tea Party movement, it has been noted that patriotism caught fire after 9/11 - for a time, and now again with the Bush/Obama abuses of bailouts, tax and spend and healthcontrol issues... as if those events somehow manufactured responses from a cross section of America, in and of themselves. I disagree.

These events didn't generate responses in the people at all. These events were only those rare moments when something on the national level reflected the existing ideals and convictions of the vast majority of Americans; and thrilled to see one of these rare moments when the MSM took note of their values, their in every way normal responses, widespread across America, were visible, and the MSM could not ignore it. 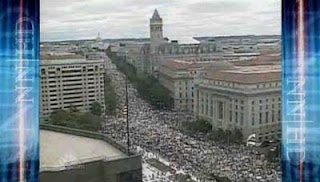 These are the people who normally don't want to be bothered with public issues, the people who'd just assume turn their backs and walk away when the local blowhards and loudmouths begin spouting off. But this time, they are beginning to realize that the blowhards can't be ignored any longer, that they are actually doing damage to the nation and principles which they value.
With the WWW, the people are no longer reliant upon the MSM's momentary interest in an event, in order to be seen. Now, they can communicate and organize across the nation, and boy oh boy are they doing that! Check out 'Moderate in the Middle' and 'Gateway Pundit', estimates ranging from 1 to 2 million Tea Partier's gathering in Washington D.C. alone, not to mention hundreds of thousands more across the nation. Gateway Pundit also points out that Conservatives seem to be a lot neater than the lefties. The MSM is flabbergasted, because they are no longer able to end their visibility, now that their fickle attention and interests in novelty has tried to turn elsewhere.
People ask 'what happened to the 9/12 feeling', my answer is that nothing happened to it, it is and has always been there - even before 9/12 - in the past, it just had relied upon a MSM to take note of it, to be seen. That is no longer the case. 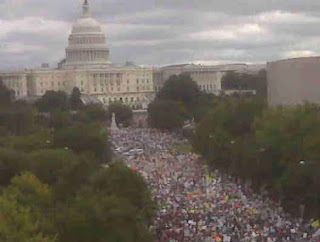 I caught Glenn Beck Saturday, and that seems to be the direction he is going in, pressing Rep and Dem alike to show some backbone and reject any legislation that isn't classically constitutional. That I like very much. But he's also got some fixation upon 56 new Founders to re-establish the ideas of the nation... not so sure what's up with the '56', other than that there were originally 56 signers of the Declaration of Independence, but of what significance is the number? Maybe he'll clear it up soon and it'll make sense... seems odd at the moment.

I watched a bit of CNN coverage of the 9/12 DC event, some metro-sexual named Don Lemon, and a couple leftie pundits, and all they could do was claim it was veiled racism. That the only thing that brought out these people to travel across the country, or to their local Tea Parties, was an inability to tolerate a heavier than normal melanin content in the White house.

That is the level of their intellectual depth. That really is all they've got. They have no arguments, they have no reasoning behind their positions, other than 'they just want it!' and that of course Conservatives are just a big bunch of meanies who hate minorities and poor people. That and that they are so sure that there are more of them than us, and they won and intend to force healthcontrol, and the other statist policies through, not because they are right, but because they can.

They have no argument. None whatsoever.

And for a political party in a nation founded upon an Idea, that is a fatal disease.
Again, don't make the mistake of thinking this is about tax dollars, as I said in April,
"Do not make the mistake of thinking these Tea Parties are about the amount of money being taxed - This is NOT a tax revolt, any more than it was for the generation of our Founding Fathers. This is an issue of whether individuals should be secure in their property and so free to live their lives in liberty and in the pursuit of happiness, or whether Government should have first claim to their property, in order to set the boundaries of their lives, distributing favors and benefits as needed, to keep them in order and happy.
The Tea Party revolt is about whether the government serves you, or whether you serve the government.
In 1773 our Founding Father’s – YOUR Founding Fathers, whether your family have been citizens here for over two centuries or two months – YOUR Founding Fathers came to the most radical of political decisions ever proposed, that Individuals had minds and souls of their own, and that they should have the liberty to exercise them in their pursuit of happiness, and that no one had the right to rob them of the rights necessary to those ends.
In 1787, those Founding Fathers, sobered by revolution and the specter of political dissolution and potential tyrannies, created the first moral government in the history of the world, one which upheld Individuals Rights to use their own minds to live their lives, free from the dictates of tyrants.
It has come to us to reaffirm those founding principles, and stake our claim to Life, Liberty, and the Pursuit of Happiness. "
The politicians who don't grasp that idea, the idea this nation was founded upon... their time may well be up... if we just keep the heat on, the Tea brewing and the whistle blowing.
Posted by Van Harvey at 12:24 AM

What a great line: "Keep the heat on, the tea brewing, and the whistle blowing." Sounds like a slogan that should be on a poster, maybe even a flag.