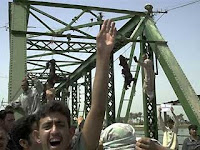 I was speechless over this administrations decision to try the 9/11 terrorists in civilian court, and in New York City, at that. What was there to say? It is what it is, and recognizably so.

I'd left keeping an open mind towards this administration behind months ago, I left refraining from anger towards this administration behind several weeks ago, having been supplied far too much evidence of their economic idiocy, perpetually apologizing for this Nation, bowing to foreign despots and with their dangerous attempts to erode our Rights beyond recognition with cap and tax and healthcontrol... any such restraint would be little more than a faux polite contrivance; however, I am now moving numbly into a state of cold, civil, bitter loathing... nauseatingly close to hatred (really? My oldest Son is entering the military early next year, and this creatures policies will.. will... yeah... nauseatingly close. Read on.), towards this President and this administration.

The Navy SEALs were recently sent in to find and capture the terrorist who masterminded the atrocity in March of 2004, where U.S. contractors were captured, mutilated, hung from a bridge and set on fire in Fallujah. They found it, captured it and brought it back. The targeted said disposable fleshbag, who for some reason has a name, as if it were human, 'Ahmed Hashim Abed' (really, we need to get past our anthropomorphic tendencies) apparently 'suffered' a bloody lip during it's capture ... and... so... three... of... the... SEALs... are... being... charged... with... abuse.

As if they were L.A. Cops arresting a civil rights leader? IT IS AN @#^$*#! TERRORIST IN A G#$#@&! WAR ZONE! THESE ARE THE SEALS CAPTURING A TERRORIST LEADER, NOT FRICKING CONSTABLES EXECUTING AN ARREST WARRANT!!!

The three warriors refused to allow the issue to be handled in a low key manner with "non-judicial punishment — called an admiral's mast — and have requested a trial by court-martial". Good for them!
Just a short time ago, in 2007, Karl Rove was accused of over the top 'fear mongering' for suggesting that democrats would insist on the "...ACLU showing up saying, 'Wait a minute, did you Mirandize them when you found them on the battlefield..." ... yeah... over the top alright.

What am I thankful for this year?

That the creature currently occupying the White House, and it's anti-American administration, have only three years to go before we get the chance to throw their filthy disgusting asses out of our nations capital... and that in less than a year we'll get to make a down payment on that action.
Posted by Van Harvey at 8:06 PM

I just don't get it. Who initiated this prosecution? When did this start? Who is supporting this?

Yeap, Obama will probably get him an extra bowl of ice cream and let him stay up late, and then send him to Bermuda to frolic in the sun.

I would've already sent him to frolic with 72 syphilis-ridden virgins.