View from the teapot:

But here's a couple behind the behind-the-scenes pics, such as, before we could put up The Gulag, it took some elbow grease even getting it to the party. CampusGulag's super secret Gulag storage facility, had it's high-tech elevator go down, so we had to get it out of the bldg the old fashioned way - handing the hefty panels down one at a time from the roof! 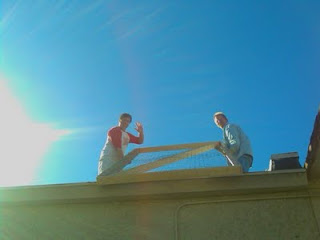 Some of the Gulag builders union local 1776, admiring it's handiwork: 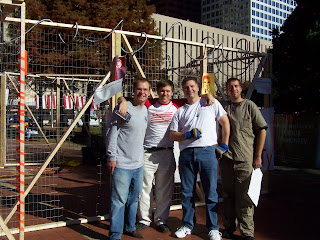 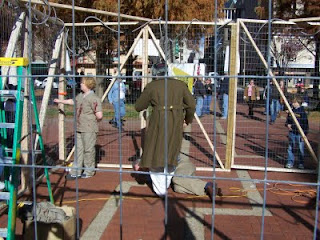 
A quick thought as I dash out to today's (my B-Day, btw) Tea Party, from Edmund Burke, who knew a thing or two about governments attempting what they should not,

"thoughts and details on scarcity
Of all things, an indiscreet tampering with the trade of provisions is the most dangerous, and it is always worst in the time when men are most disposed to it: that is, in the time of scarcity. Because there is nothing on which the passions of men are so violent, and their judgment so weak, and on which there exists such a multitude of ill-founded popular prejudices.

The great use of Government is as a restraint; and there is no restraint which it ought to put upon others, and upon itself too, rather than on the fury of speculating under circumstances of irritation. The number of idle tales spread about by the industry of faction, and by the zeal of foolish good-intention, and greedily devoured by the malignant credulity of mankind, tends infinitely to aggravate prejudices, which, in themselves, are more than sufficiently strong. In that state of affairs, and of the publick with relation to them, the first thing that Government owes to us, the people, is information; the next is timely coercion: the one to guide our judgment; the other to regulate our tempers.

It's nothing new, fools are a crop that never fails to produce. It is up to the Farmer to weed them out or let his land be over run. 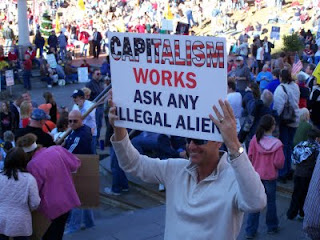 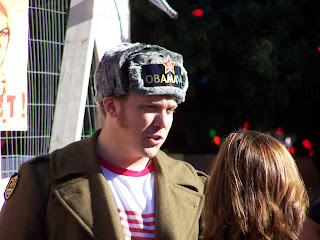 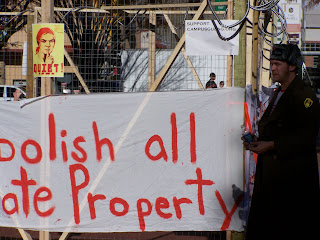 A Tea Party sounds like an awesome way to spend the day. I hope the right people are listening and learning.

Happy Birthday, Van!
I hope you had a fun and joyous one! :^)

"It's nothing new, fools are a crop that never fails to produce. It is up to the Farmer to weed them out or let his land be over run."

And, sadly, it's been a bumper crop the last few major election cycles.

Happy B-day, one day late!
More and more, I think so many things could be fixed by just leaving them alone.
People are not machines!

An excellent B-Day, a little light workout & protesting for the morning and afternoon (checkout the updated pics & links), then crazed samurai chef's for dinner with the family, and home to handmade B-Day cards & a movie.

Happy birthday Van, funny thing is my birthday is tomorrow. The 30th. That explains so much to me. haha

Lance, I missed that, Happy Birthday to you too!