Critical Thinking in action: The Sikh temple shooter was a white male, ergo: it's all Conservatives & Rep. Bachman's fault!

We've had another example this weekend, of people who were most likely unarmed, being shot by someone who had no regard for an individuals rights - not their right to life, nor their right to think or worship differently, or of any other right or regard for the laws protecting them; all were brushed aside to satisfy one persons appetite to kill, the appetite to force his way upon others, even to the point of murdering them.

Curiously, this self evident information has been absent from the media and conversation I've had the displeasure to observe raging about, once again. 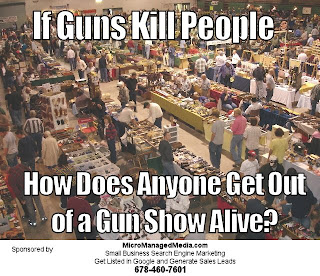 The fact is that the one bit of relevant information that was possible to be known, before any of the other facts were discovered, was this - that a person with no regard for individual rights, took the lives of others, because he wanted to and thought he could.

Which is why, I suppose, it has not been reported, or even hinted at, in any of the initial reports by the media, or in the initial responses from the Twitterverse or Blogosphere. What were their initial assumptions? Apparently their thought process went something like this:

Though not a valid example of a syllogism, it is a very disturbing, and common, example of what might be called a Sillyogasm - feelings asserted at random in order to reach a desired climax. I won't bother with the reams of logical fallacies involved there, but instead focus in a bit on what it tells us about the thought process that must have been used, in order to assemble them into something that they actually thought was actually a thought.

To put it mildly, their conclusion does not follow from their premises. Rather, their conclusion obviously preceded the premises, which were arbitrarily selected in order to inflame and advance a political agenda, in spite of the information which they did have available before they formed their conclusions (such as the fact that the point of Conservatism is to conserve the Individual Rights of all Americans, as they are secured through our Constitution), prior to their having any real information about the attack, for them to consider.

In other words, they stated their conclusion and guessed about which examples they could 'think of' that might be made to support it; in other words this is an example of what our schools teach as 'Critical Thinking' skills.

Have you ever cracked open even a grade school level 'science' textbook? The basis of the all important 'Critical Thinking' skills which our schools are so focused upon, such as how to formulate an hypothesis under the 'scientific method' (here's a good example of this), are typically actually taught in the classroom by exasperated teachers, in this manner:


Teacher (facing the blank stares of students who don't understand their 'Hypothesis' worksheet) - 'Just make a guess about what you think will happen. Write down why you guessed it. Then write down how you'll know you were right, and what would show you were wrong.'
Kids - 'What should we guess about?'
Teacher - 'Anything, anything at all.'
Kids - 'Like what?'
Teacher - '[slight pause while silently cursing the idiots who mandated that the 'Scientific Method' be taught out of the blue to kids with no solid knowledge to build upon] It's up to you, just pick something... 'which cookies people will like most'... whether 'flipping a coin will come up more often heads or tails'... just make a guess and support it.'

(Yes, this is an actual example from our recent experience with 6th grade science homework.) An hypothesis is typically described as


"An hypothesis is a statement or explanation that is suggested by knowledge or observation but has not, yet, been proved or disproved."

, but doing that, scientifically, requires first off, a foundation in knowledge of the phenomena being observed, an informed understanding of what is happening, and then a plan to test the soundness of that understanding. Do you see even the possibility of that in this actual classroom example above?

The lessons that are actually learned from these exercises have nothing to do with Science or 'Critical Thinking', what is learned from them, is that you should make guesses about what you feel is right, and then find 'evidence' to support it.

Want to test my 'hypothesis'? Look at the reactions in the Media, Blogosphere & Twitterverse!

If you haven't seen them yourself, you can find examples of this non-sense in the screen shots of actual comments that Ginny Kruta has provided in her post here, or in Doug Welch's sampling on Liberty News, such as those congratulating Michelle Bachman for the murders that were obviously committed due to her 'Christian hate speech', and that:


'It may be time for Fed Law Enforcement to look at those who may use speech to incite violence,, ie Michelle Bachman, Limbaugh Fox, Beck---"

Did these peoples immediate reactions touch, in any way, upon what could actually be known, beyond the simple fact that people, Sikhs, had been shot dead? No. As I already mentioned at the top of this post, the only relevant information that could be known, was never even raised, and I've seen no evidence that any of those concepts (Individual Rights, Conservatism, Constitution) have been understood or applied or 'factored in' to their thinking processes.

I see no indication of any actual thought having been given to these tragic and horrible circumstance, I see only the rantings of hysterical children demanding their ice cream, gun control and the elimination of uncomfortable thoughts. What I see in their 'thinking', is the collective mass reaching for the results that they wanted to assert, such as

, which they immediately set about spewing out towards everyone they could manage to splatter with their thoughts.

Aside from the obvious idiocy of blaming anyone other than the shooter for the deaths caused by his shooting at them, the lack of actual thought displayed here is staggering. Their willingness to use words devoid of understanding, as little more than useful filler in padding out their assertions, is indicative of such a lack of education, that it could only have come from one place: our educational system.

In other words, what is expressed in these 'thoughts':

, are an expression of 'Critical Thinking' which is critically devoid of anything remotely resembling informed and methodical thinking - which is exactly what IS taught AS 'critical thinking' in our schools, day in and day out. Only a daily immersion in a 'thinking method' for a period of 6, 12, 14, 16 years or more, could cause a person to not think, in such a deliberate manner, to not think about the essential concepts that are so critical to what it is you are attempting to think about. You either have to deliberately avoid thinking of them, or be so thought-impaired, that you simply habitually skip over, any consideration, of anything, that might divert your attention away from what it is you want.

What that used to be called, was being driven by appetite, which was once the very definition of being a child, and which school was, once upon a time, designed for the purpose of raising you above. Obviously, that is no longer the case.

In the rush to have their desired conclusions, there are simply no thoughts given to what conservatives are, only to what they want them to be, the possibility that banning these things (guns) or that speech (Conservative, Christian, etc) might conflict with what Rights are (specifically those defended by the 1st & 2nd Amendments) are simply brushed aside, if even that amount of effort can be granted them, not even what might constitute 'hate speech' is considered (which is apparently any thought that isn't in strict compliance with politically correct dogma), these are all entirely, and seemingly intentionally, left unconsidered, in their rush to promote and advance their preferred political agenda.

Because they want it. Appetite driven. Children.

This is nothing new. I'll spare you my typical references back to developments such as 'The Frankfurt School', Dewey, Hegel, Rousseau, etc, and just offer up this snippet from 1991, from "Jam Today at Last!", Richard Mitchell's skewering of the farce that is the teaching of 'Critical Thinking' skills in our schools,


"... So at last they came up with critical thinking, distinguished from mere thinking in that it was, well, critical, you know. They didn't put it this way, because they're not too good at figuring out what they mean, but they obviously did sense (aha! another substitute for thinking) that critical thinking ended up with something that was not in the "thinker" until after the thinking had been done, and the mere thinking was a way of declaring what was already in the thinker. And thus it was that they ended up, for awhile, trying to teach logic as though that were thinking. They did know, after all, that logic reached conclusions, which made it seem comfortably similar to Dewey's notion of thinking as "problem-solving activity."

It did not occur to them, apparently that logic was also uncomfortably like problem-solving in that it could reach only those conclusions already implicit in its givens, and the teaching of it was, in any case, no fun at all. As far as we know, logic is no part of the standard curriculum in any of the public schools.

The term "critical thinking" made the school people feel pretty good for awhile; it suggested a technical proficiency not unlike that of the sciences, and implied, in those who said they could teach it, an expertise for which schoolteachers have in general not been celebrated. But there was a problem; it was that word, critical, which the school people in the Affective Domain construe as meaning something very like hostile. You can hardly blame them; any truly critical consideration of what they do in the schools must end by being, at the least, not flattering. There is worse. If school children were brought into the habit of critical thinking, might they not become critical? Might they not, by logic alone, notice incoherence and in consistencies in their schooling? Might they nor begin to question some of the supposed social truths and goods which are preached to them as worthy and feelings? There is, after all, nothing more galling in any teacher's class than the smartass who makes sense..."

Whatever may be discovered in the coming days about the shooting in Wisconsin, my hypothesis is that what will be most relevant to the rest of us, is what will likely remain unconsidered:

Does these premises follow from one another or lead to a conclusion? Is there something important left out?(there is). I'll leave that for you to think about, and only suggest that it is critical that you do so.
Posted by Van Harvey at 2:53 PM