The election is upon us - Tuesday, April 5th, get out and vote for Adam Bertrand and Randy Cook!

UPDATE - Both Adam Bertrand and Randy Cook won in FHSD, and also Izzy Imig in Rockwood! Congratulations candidates and citizenry!

Even if you haven't paid close attention, you've heard about the issues surrounding education and school boards, locally and across the nation, concerning key issues, curriculum, and various excuses and evasions made for them. What triggered the controversy, was when shortly after remote learning began, parents were shocked to overhear what was being taught to their kids, in their schools. Unbeknownst to them, such ideological lessons and activities have been pervasive in our classrooms for years, with the knowledge and consent of the establishment educational system and supporting political figures (Left & Right), who had been confident that parents and the wider community would never find out, or wouldn't take much notice of them if they did. Why? Because they either personally agreed with those practices and policies, or they aligned with them because of what the pretense of them did for their own image.

The four establishment candidates in FHSD, one of whom has been on the Board of Education for 12 years, have no substantial concerns with how things have been run, or with how little parents have been informed of what they've been doing. When pressed to voice some concern about the turmoil in our district and districts across the nation, they'll answer that maybe they should've explained it better to the public, who they think should be grateful that the 'experts' (themselves) know best, and continue supporting them. If you like the way things have been going, there's not much I can say at this hour to change your mind.

For those who are not so satisfied with the current state of our educational system, there are two candidates in the Francis Howell School District race, Adam Bertrand, and Randy Cook, who do recognize that there have been problems, educationally and fiscally, and who will do their best to return responsible oversight to our entire school system.

I suggest visiting each candidate's website to get their views on the issues, perhaps beginning with their priorities for FHSD: 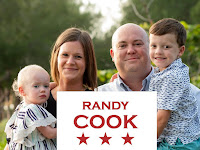 Randy Cook:
If you're in the Francis Howell School District, I very much hope you'll cast your vote for Adam Bertrand and Randy Cook.
Elsewhere in Missouri, those concerned parents and community members who have been paying close attention, are supporting these candidates:

Van, wondering about the results of the election. Did the candidates you suggested support for prevail?

John, sorry so late responding - I just double checked, and weirdly didn't get a notification in email, but yes, both of our FHSD candidates won, and also Izzy in Rockwood!

Morning, Van. Saw your OT note over at Gagdad's this morning. A mere oversight not noting my inquiry. Have a blessed day!