I hate to interrupt the jubilation over bin laden's death, but there are still terrorists in the world, and unfortunately our friend Adam Sharp, of SharpElbows.net, had personally demonstrated upon himself, the truth of what I said in my last post: Freedom of choice or the Fist of Force. 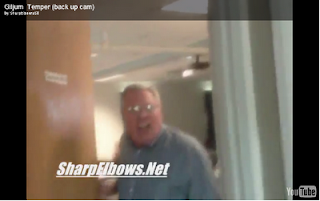 Don Giljum, the communist union thug and co-teacher of a Labor Relations class at UMSL, had the choice of responding to a question with words, or by answering it with violence – being a communist union thug, he of course chose to practice what he teaches your children daily – violence. Fittingly, he not only threw a punch at Adam, but destroyed his property (the two do go together), taking and smashing his video camera.

Adam, always prepared, pulled out his back up cam and caught a fine portrait of a modern Professor of communist ideology. Go to BigGovernment.com and have a look:

"UMSL Lecturer Don Giljum Assaults Citizen Journalist, Police Confiscate Video“…Giljum and the other man parted ways and he started to head back to his classroom.
I asked, ”Are You Don Giljum?” as he approached. ”Yes,” he responded, coming towards me. A press pass hanging around my neck was cleary visible. He walked up to me and stood in front of my camera with his back to the classroom door. I asked “When was the last time you committed industrial sabotage, or threatened the use of industrial sabotage to gain leverage in a Union negotiation?” “Never, said Giljum, “that was all taken out of context.”He asked me my name and I told him. He then asked me who I was with. I told himSharpElbows.Net. “Are you the one who did the internet hatchet job on me?” he asked.  “I didn’t see any hatchet job, just your words on video” I said. That’s when Giljum appeared to lose it!He grabbed my camera, breaking it off from the mono-pod upon which it was mounted. The mono-pod fell to the ground behind me and the camera slammed to the floor, tumbling under a desk on the side of the hall. He then tried to punch me. Luckily, I was able to quickly mostly slip Giljum’s punch, stepping back away from him. Once I felt I was at a safe distance, I pulled my back-up video camera out of my pocket and was able to capture a small piece of video….”"